On August 15, I was in Salt Lake City for the Mu Phi Epsilon National Convention, when I was called me out of the nominating committee to tell me to “call this number”. I had been expecting that call for nearly six years. 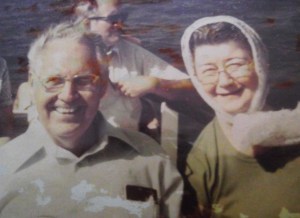 “Dad’s prostate cancer has come back,” Sarah told me when I reached her. “You need to come now.”

Mom and Dad had always looked at Baptist Memorials Retirement Village in San Angelo as a possible “last stop.” But for a number of years after retirement they remained in Waco in their home near Baylor. There was no rush.

After Mother’s debilitating strokes in 1986, she was bed-ridden. She went into a nursing home in Waco, and Dad visited her every day – all day! A year later, Dad had a series of little strokes that scrambled his short-term memory. He could no long drive to visit Mom or live alone. With his consent, we moved them to Baptist Memorials, she to the Geriatric Hospital, and he to a one-bedroom apartment in the ‘high-rise’.

After four years, Dad asked to be with Mother – he was becoming more confused. Sarah and I had already discussed this possibility and were happy to have him make the decision and not us. They lived together in the secure care section for nearly a year before the call came.

I flew out early the next morning, connecting through Denver to Dallas/Ft. Worth International where I boarded a 21-passenger “tree hopper” to San Angelo. I arrived in the afternoon with the temp hovering between 110° and hell. Sarah met me at the little airport and filled me in as we drove to the hospital.

Dad had had prostate cancer while I was in Brazil and been treated with radiation. All seemed clear. Even his recent physical had shown no new developments. Only when the nurses realized Dad was in distress did they discover that the cancer had returned with a vengeance, blocking his urethra. He needed dialysis to survive.

But there was another complication. His cancer had already spread to his bones. Our choices were not easy – life with dialysis accompanied by bone cancer chemo and radiation, which might not be successful, but would be terribly painful. Or do nothing. According to the Urologist, Dad would die of uremic poisoning within five days and his passing would be pain-free.

At 82, Dad lived with confusion. He could quote Bible verses and poetry learned in high school, but he couldn’t remember what had happened five minutes before. He knew where he was when he saw Mom in her bed every morning, but was mentally stuck on a cold November day six years before when he’d had his strokes. No matter the time of year or the temp outside, he woke up, put on a flannel shirt, turned up the heater to about 80° and shuffled through his confused day.

To us, the choice was simple; but Sarah was the only one on site when the decision had to be made.

“If one of the doctors asks,” she said as we entered the hospital, “I consulted you and David before deciding not to put Dad on dialysis and just let him go peacefully.”

Of course. We three had agreed – whoever was on-site when a decision had to be made, the other two would back him/her up.

David arranged to be away from work and flew in on Tuesday afternoon. Dad was peaceful. Though sedated, he could hear his three children talking politics and memories. He put his hands together across his waist and breathed his last. The clock read 12:39 AM.

We waited thirty minutes before calling the nurse … we just stood at his bedside and said goodbye.

By 2:30 AM, the funeral home had taken Dad to prepare him for transport back to Waco for burial. We drove back to Baptist Memorials and our guest room, and went to bed.

The next morning, after breakfast, we packed the car and prepared to visit with Mom and tell her what had happened. I wasn’t sure she would understand. She couldn’t communicate with  us other than squeezing a hand or smiling. Nevertheless …

As we stood in the parking lot of the high-rise, talking to their good friends, I saw the Director of Baptist Memorials walking toward us, his new assistant in tow.

“I’m sorry to have to tell you, but your mother just passed away,” he said. “She had her meds at 9:30 and when the nurse went back about 9:45 to bathe her and get her ready for the day, she
had gone.”

I looked at my watch … 10 AM. We had waited to go see her because we knew the routine.

“We were just coming to tell her that Dad passed away early this morning,” one of us said, I don’t remember who.

Silence. Then someone said, “He came and got her.”

David and Sarah and I all spoke at once in response. “Oh, Mother was never on time for anything, Dad knew to wait.”

We laughed. We probably shed a few tears, too. We drove across the street to see her. She looked peaceful.

All of a sudden, I remembered the funeral home. I went to the phone and called.

“Has Ray Summers’ body left for Waco yet?”

“No, we plan to leave in about fifteen minutes.”

“Can you wait? Mom just passed away and we’d like them to go together.”

“Well, bless your heart. Of course. We’ll be right over.”

Within the hour, the hospital released Mom’s body. The funeral home director told us they would leave about noon and get into Waco about 5 PM. He would alert the Waco funeral home.

Once again, we said our goodbyes, this time to the staff as well as friends. Then we got in the car and drove back to Waco.

I will admit to being relieved. Throughout the years since their strokes, we had been in a constant grieving state, even without knowing it, with no end in sight. We still had the funeral and burial to go through, but now we could let the grieving process complete itself.

In the years since, on this day, I remember …

When friends lose their parents, I remember …

And then I can laugh again at Mother’s funny sayings and Dad’s jokes. They dated and were engaged a total of five years, and married  for fifty-eight. Always together – even now.

You are currently reading On This Day … at my other zone.