Although this post is not directly related to July 4th celebrations sprouting up all over the country, it is a celebration of sorts.

Over the last two days, I’ve been on a treasure hunt! This hunt has taken me many places: file drawers of old photographs – I’m talking ancient here; a briefcase full of family information; and an on-line ancestry search-engine-and-family-tree-making website. Let me tell you … I have a LOT of ancestors, and they all came to this country for the free stuff – free land, free religion, free thinking! This is what America is all about. So now, I invite you to celebrate with me … on a treasure hunt!

Doing the ancestor search/family tree thing isn’t new with me. I’ve been meaning to do it for some time. Moreover, I wouldn’t have to be starting from scratch. Mother began this project long ago – I have her briefcase to prove it! I dreaded the work it would involve, however. I didn’t have the time! But, a visit to a friend in Texas last August convinced me that with the ‘cloud’ out there, storing all sorts of ‘minutiae-ted’ information, creating a family tree would be easy! Ha! But I’m doing it anyway!

Then in March of this year, I actually sat down at my computer and began my family tree. I uploaded the gravesite photos to the appropriate relatives with the information I had. While doing this, Ancestry.com gave me a little leaf (a hint about more available information) and I found a photo on another family tree of my great-great-grandfather Erasmus D. Pitman and his
wife, one Temperance Looney Pitman.

Erasmus D. Pitman and wife - but which one?

Fast forward to Friday, July 1. I opened an email from a guy also hunting on-line ancestral connections. He had seen the photo of Erasmus D. and wife Tempy on my family tree and determined that it couldn’t be of Temperance Looney Pitman (his g-g-grandmother) because the woman looked too old. Could this mystery woman be one of the other wives? I would check, I emailed back, and the hunt was on!

He was right, of course. I knew that Erasmus D. had two wives, but now discovered a third, which added another dimension to the question of which wife was in the photo.

First Wife: Temperance (Tempy) Looney Pitman gave him two daughters then died early in 1854 at 27. Ergo, the photo couldn’t be of her, as he suspected!

Second wife: Mary E. Todd gave him two more daughters (my great-grandmother was her second) and died in 1861. Therefore, she was also not the wife in the photo!

Third Wife: Nancy Elizabeth Mathis Pitman gave him two sons. Erasmus died in 1870, she in 1924. My conclusion – the wife in the photo with Erasmus must be Nancy Elizabeth. She was the only one who lived long enough to grow ‘older’ with him.

But am I correct in my assumptions? Just to be sure, I began to delve deeper into my mother’s old filing cabinet, which now sits in my husband’s office. That ‘treasure chest’ contains the family history in photos. Could there perhaps be one or two of Erasmus and wives? All I had to do was open the drawers and look closely enough.

Saturday I began, spending an entire morning sneezing through old folders and albums, and squinting at fading photographs. And there I found the treasures … two 1×2” tintypes – one of a younger Erasmus and a young bride … but which one?

As soon as the neighborhood golf-scramble/hot dog feast ended, I hurried back to my computer. I knew that to discover which wife was depicted in the tintype, I must first research tintype history.

Voilá! In a back issue of Ancestry.com’s newsletter, I discovered that the American process known as tintype (cheaper than its European daguerreotype forbearer) was patented in 1856, sending a multitude of photographers out to county and state fairs across the land, producing untold thousands of the hearty little pictures. I say hearty because according to the article they  exist in shoeboxes, waiting patiently for discovery by just such progeny as I.

So … who is the mystery tintype bride?

Not Temperance, as she died before the hoard of photographers could get their equipment to the wilds of northern Arkansas.

Not a younger Nancy Elizabeth, third and most enduring wife. The woman in this tintype looks nothing like the older wife in the other photo.

Ergo – this must be my great-great-grandmother, Mary E. Todd Pitman and taken during her short marriage to Erasmus D., 1854-1861. The fact that she favors all the other women on the maternal side of my family is also a clue. Just compare the tintype to these photos.

who is the mother of Mary Ollie Hayes Hilger,

who is the mother  of Jester Buena Hilger Summers – who is my mother!

I just love a mystery!

I happily photographed the tintypes, opened the Summers/Hilger  Family Tree on Ancestry.com, and uploaded the photos to the appropriate files.

Now fully engaged with the treasure hunt, I didn’t stop with the tintypes. Long into the nights of both Saturday and Sunday, I photographed other photos, doing the Photoshop thing – lightening the dark images, ‘contrasting’ the too-faded ones. I met ancestors I had only heard of in my youth. I read their stories, briefly scrawled on the backs of the photos in various handwritings and colors.

I found Mom’s glam shot – her high school graduation photo – and others, giving me a timeline of her image I had not experienced before. I found Dad’s high school photo, and then others of him with me as a toddler and my big brother David – pre little sister Sarah! Why had I never seen these before? 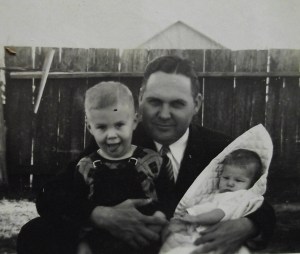 Wow! What a great way to spend a holiday weekend! And these were just the loose photos in shoeboxes! Next – the ALBUMS! I can’t wait! As soon as I get the cramp out of my ‘mouse’ hand, I’ll be at it again!

§ 5 Responses to The Treasure Hunt

You are currently reading The Treasure Hunt at my other zone.