In an early post – “From Classical to Country – My Life’s Soundtrack” – I mentioned that I attended my first opera – “Carmen” – at the ripe old age of five. The following spring – I  was six by then – I attended “Faust”. In the fall of my First Grade year, Mother took me to a Margo Jones Theatre-in-the-round production of Shakespeare’s play “The Merchant of Venice” (I got out of school early for that one).

You see, our parents didn’t take their friends to these performances, they took us. Often we were the only children in the audience. We got used to the reactions of horror from the  adults sitting around us, but once they realized we knew how to behave – and probably as much about the composer and his music as they did – they got used to us.

I only mention this as an introduction to the “why” of our parents taking us to Southwestern Baptist Theological Seminary’s School of Church Music annual performance of Messiah by Handel – all 3.5 hours of it! As when we took our long summer trips and Mother sat in the back seat reading to us from the guidebooks about the history of the places we visited, before we attended any performance, we read about it. We were always prepared, hence, for
Messiah we even had our own score.

Let us pause for a little history. When Handel arrived in England with the first Hanoverian king, George I, he was already famous for his music, including his Italian operas. Handel enjoyed some success with these stage productions in London – which used male sopranos and contraltos (castrati) in all the female parts. However, he soon discovered that English audiences possessed a great love of choral singing. The English choral societies also wanted great works to perform – in English, please – and Handel knew a good thing when he saw it. He became the oratorio king with his first production. 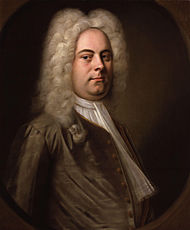 Therefore, it is not surprising that a choral society in Dublin, Ireland would wish to commission a work by the greatest composer of his generation. What a wonderful opportunity to compose a new oratorio on a theme suggested by his friend and collaborator, Charles Jennens. In the summer of 1741, Handel began setting Jennens’ Biblical libretto  of the life and work of Christ to music. Within 24 days – August 22 to September 14 – he finished Messiah.

Inspired? Definitely! A miracle? Hmmm! Handel often borrowed from his own earlier operas and oratorios when composing new works and Messiah was no exception. In this way,  Handel had a completed first draft quickly. Even after Messiah premiered on 13 April 1742 at the Music Hall in Dublin, however, Handel continued to tinker with and rewrite many of the choruses and solos, as well as the orchestra score. Although some say that it would be hard to find one completely “original” score, there are scores in Handel’s own script, showing his changes and corrections.

In Handel's Own Hand

There are many traditions surrounding Messiah; one of the most enduring is associated  with the “Halleluiah Chorus”. This tradition holds that when Queen Victoria first heard the “Halleluiah Chorus” she was so moved that she stood – and, of course, when the Queen stood, everyone stood! Probably not true, but even without the tradition that one chorus is so exhilarating that anyone listening just wants to stand!

This weekend, Tom and I sang two performances of the Easter & Second Coming portions of Messiah with the North Lake Presbyterian Church Concert Chorale. No, we’re still Baptists, but the Music Director at North Lake put out the siren call – “Messiah” – and we had to be there! Between this weekend and the Christmas portion of Messiah, performed by our Villages Philharmonic Chorale last December, Tom and I have had our yearly dose – and loved it!

While we performed yesterday, I didn’t need to follow along with the soloists. I know them all. I’ve performed the soprano solos many times over the years in concerts and recitals. As a voice teacher, I have taught all of the solos to my students. But I love the choruses best – “Since by Man Came Death (By Man Came Also the Resurrection of the Dead)”. What a wonderful testimony. What a thought-provoking way to celebrate Holy Week.

Yesterday, when we sang Messiah, I again worshiped and remembered those early days when I first experienced the wonder that is Messiah. For me, I am still experiencing  it!

You are currently reading Just say Handel’s “Messiah” and I’m Ready to Sing! at my other zone.